A crime that will decisively affect the lives of everyone involved is at the beginning of the dramatic miniseries The Wasteland. When the mayor of a North Bohemian village, Hana Sikorová, finds herself at the height of her fight against a large mining company offering the villagers a large severance package in exchange for abandoning their homes built on brown coal deposits, her 14-year-old daughter Míša disappears. After years of peaceful coexistence with others, the search for her daughter leads Hannah to question the entire community, which begins to disintegrate and show its true colours under the influence of events. The unraveling of the mystery branches the story into several intertwining storylines, graduating into unexpected connections. 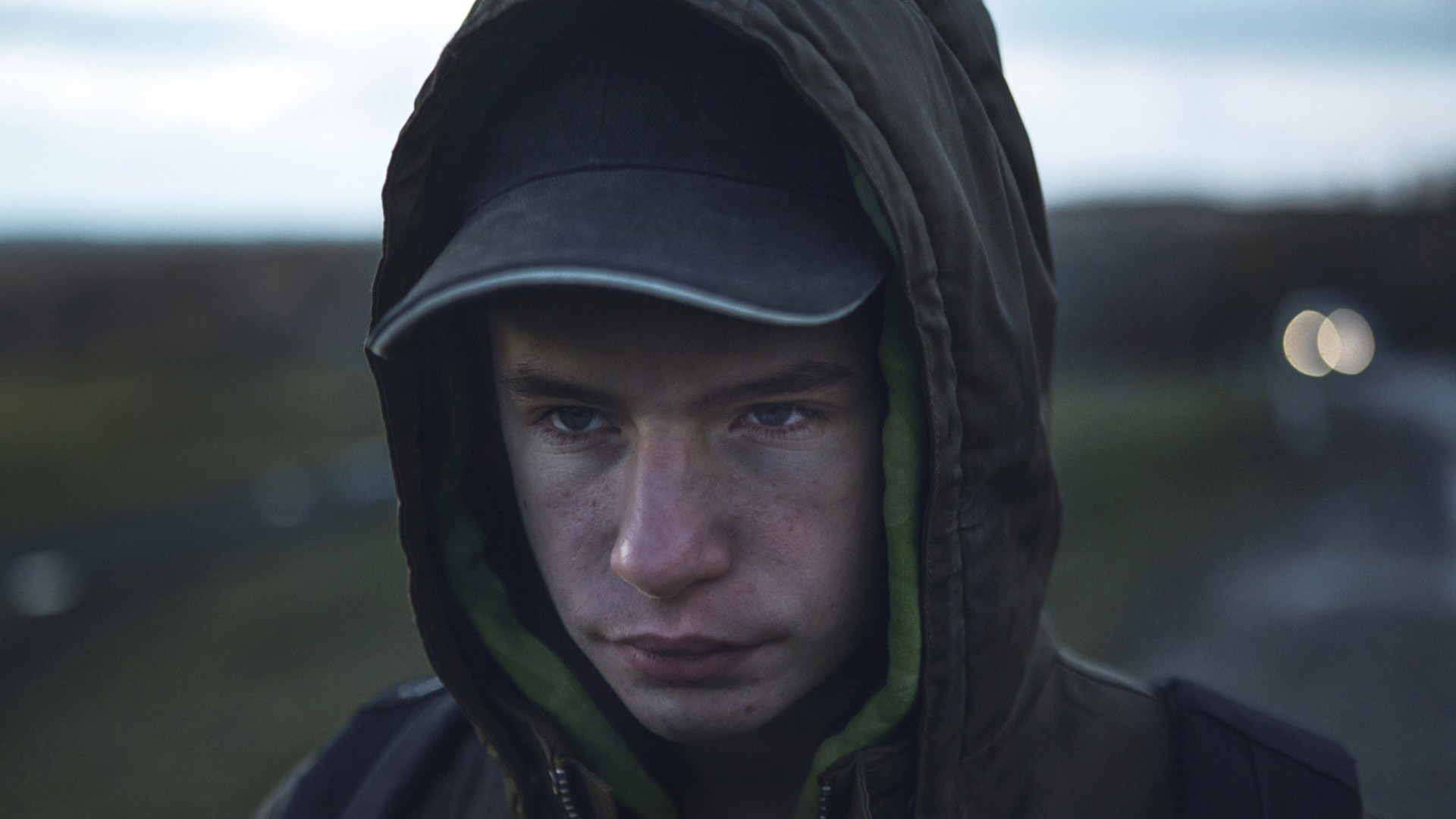 Nut developed and produced this 3-part miniseries for HBO. The Burning Bush describes the legal battle between Jan Palach's mother and the new hard line communist regime over her son's legacy. As social resistance finally collapses after Jan's death and society takes the presence of Soviet troops as an immutable fact, a few courageous individuals form the leaders of a new opposition.On the one hand, the miniseries is a cinematic anatomy of the emergence of normalization, describing the processes, pressures and fears that so quickly and effectively created a society-wide current of 1968. On the other, the story will focus on a few individuals who, against all reason, decide to go against this current. The Burning Bush is a film about the legacy of Jan Palach and the impact of his actions on our society. 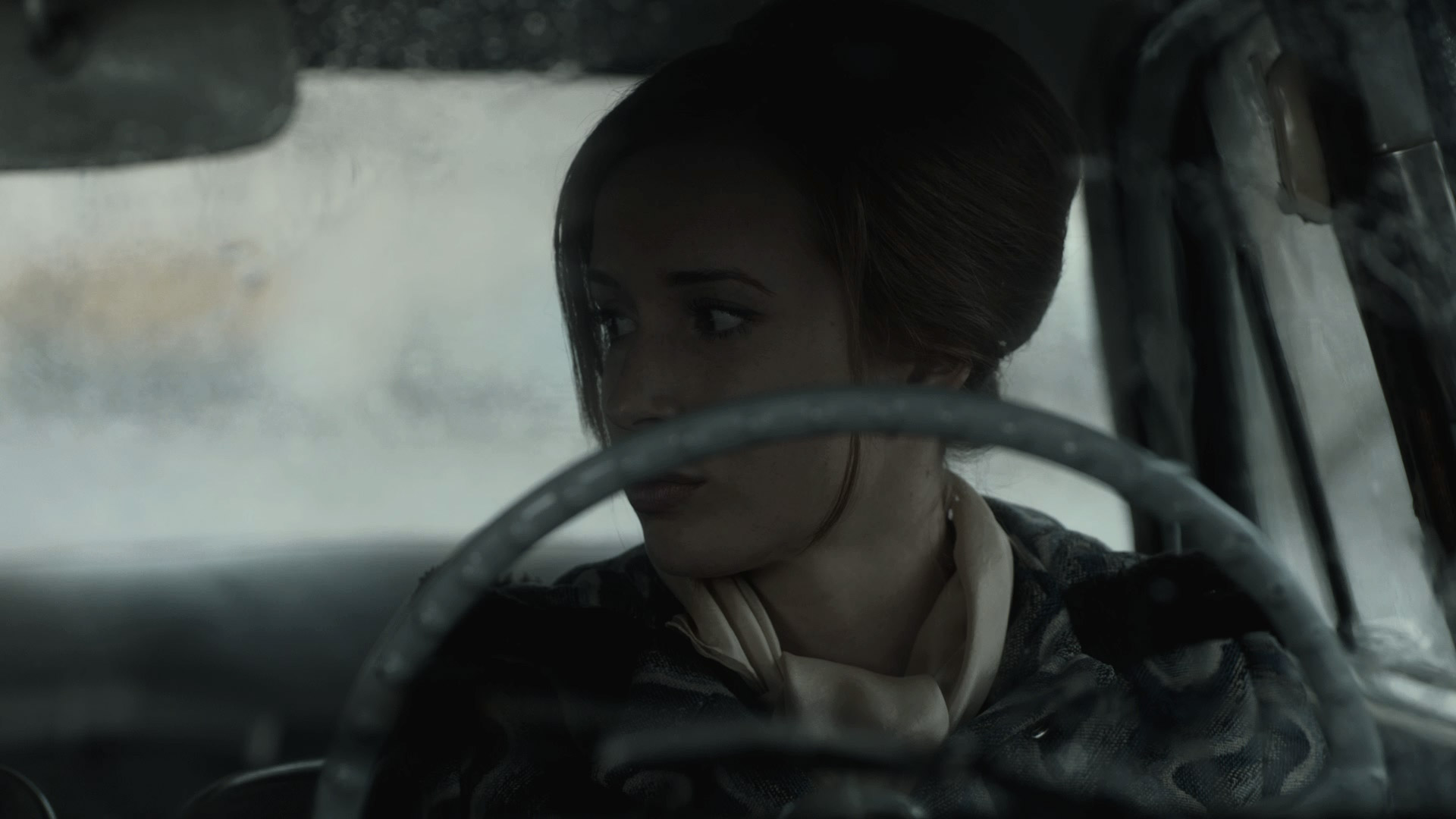 Teo, Renata, Anicka and Nikola are 19 years old and live ordinary lives as teenagers growing up in a small Czech border town where all four attend the same school. The film depicts its protagonists in situations where the carefree nature of high school is slowly replaced by the anxiety of the impending step into the adult world. Each faces an important life challenge, at the end of which nothing will be the same. And it's not just about graduation. Faced with new responsibilities, who will stand up to them, who will truly grow up?The camera is almost intimate with the characters most of the time and draws the viewer inside the world of each character. The dynamic editing emphasises the distracted and unfocused nature of the younger generation. Nothing Like Before offers a cinematically captivating glimpse into the lives of teenagers who have to grow up before they want to.

They evolved for millions of years, finally to be left to their own fate in the bamboo forest. There they were found and taken in by the most primitive of primates - humans. The story of a species whose humanity is intertwined with even the most domesticated areas of life. Species that doubt their destiny, passed on from their ancestors, fall out of the evolutionary game for viable offspring. In the present cycle of the world, humanity has begun to claim the greatest space without worrying too much about the consequences of its actions. The film "Pandas" depicts the play for life of a black and white animal exposed to the greedy and voyeuristic appetites of humans, which go hand in hand with the paradoxical human notion of animal conservation and species diversity. Self-appointed conservationists are trying to push nature in the "right" direction and ensure a future for pandas on earth, even though they themselves may not want it. 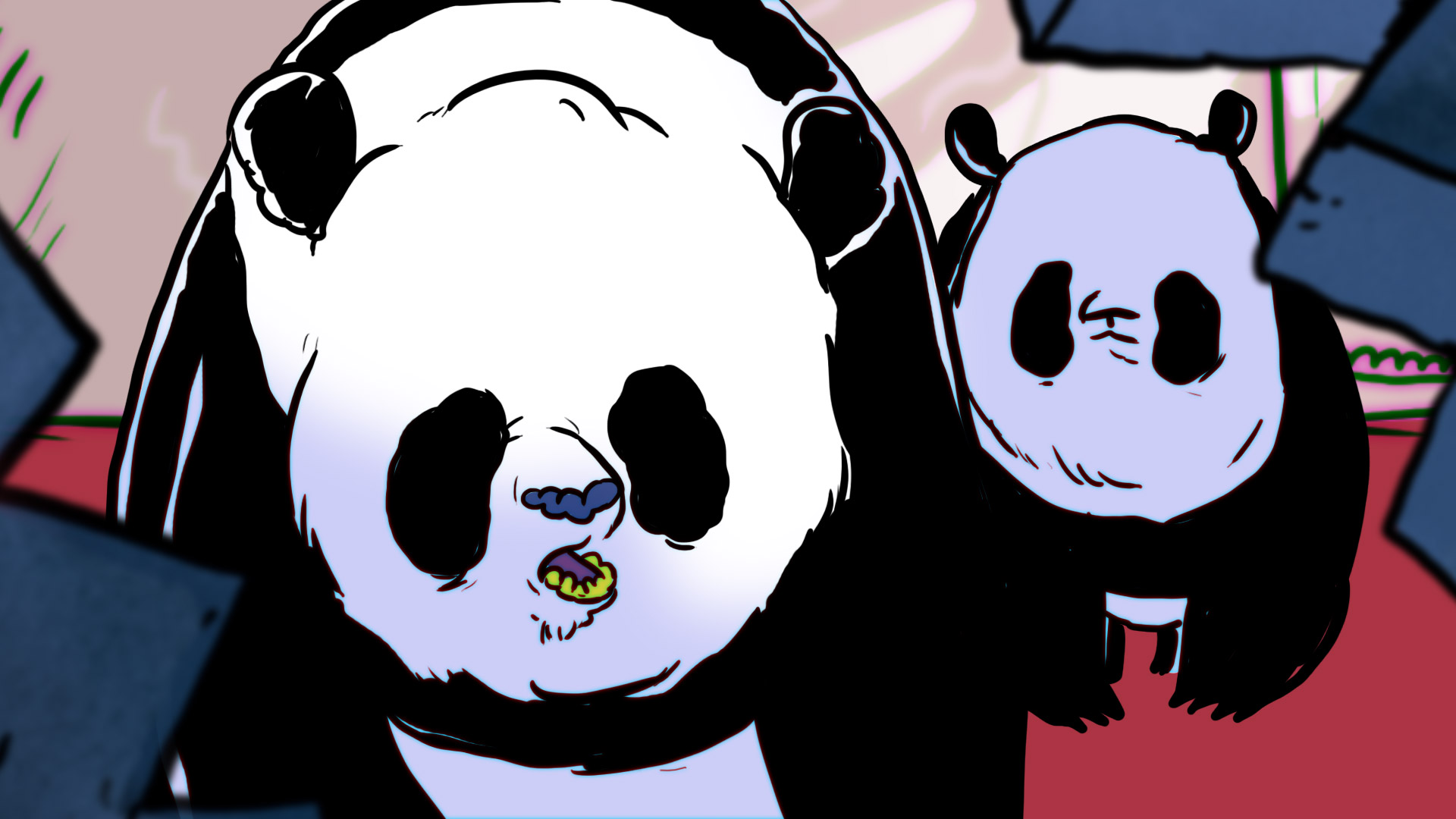 "I'm at an age and also in a state where I have to wash my feet well every time before falling asleep, in case an ambulance comes for me in the night."
– Janina Dušejko

Over the Bones of the Dead is a film by the world-famous director Agnieszka Holland, based on the successful Polish novel by Olga Tokarczuk "Drive Your Cart and Plough Over the Bones of the Dead".
Through the energetic and highly eccentric character of Duszejk, a retired English teacher, we follow the growing horror of a small settlement on the Polish-Czech border, where several mysterious murders happen in quick succession without any clearly explainable logic or motive. The horror and dismay of the murders contrasts with the general disinterest that accompanies the mass killing of wildlife during the ongoing hunting season. Dušejková is not only an animal lover, but also a protector of all the strange and 'other' inhabitants of the Kłodzko Basin, where the story is set. Through Dušejková, we gradually begin to discover who is behind the strange murders and how they are connected to the slaughter of the animals. 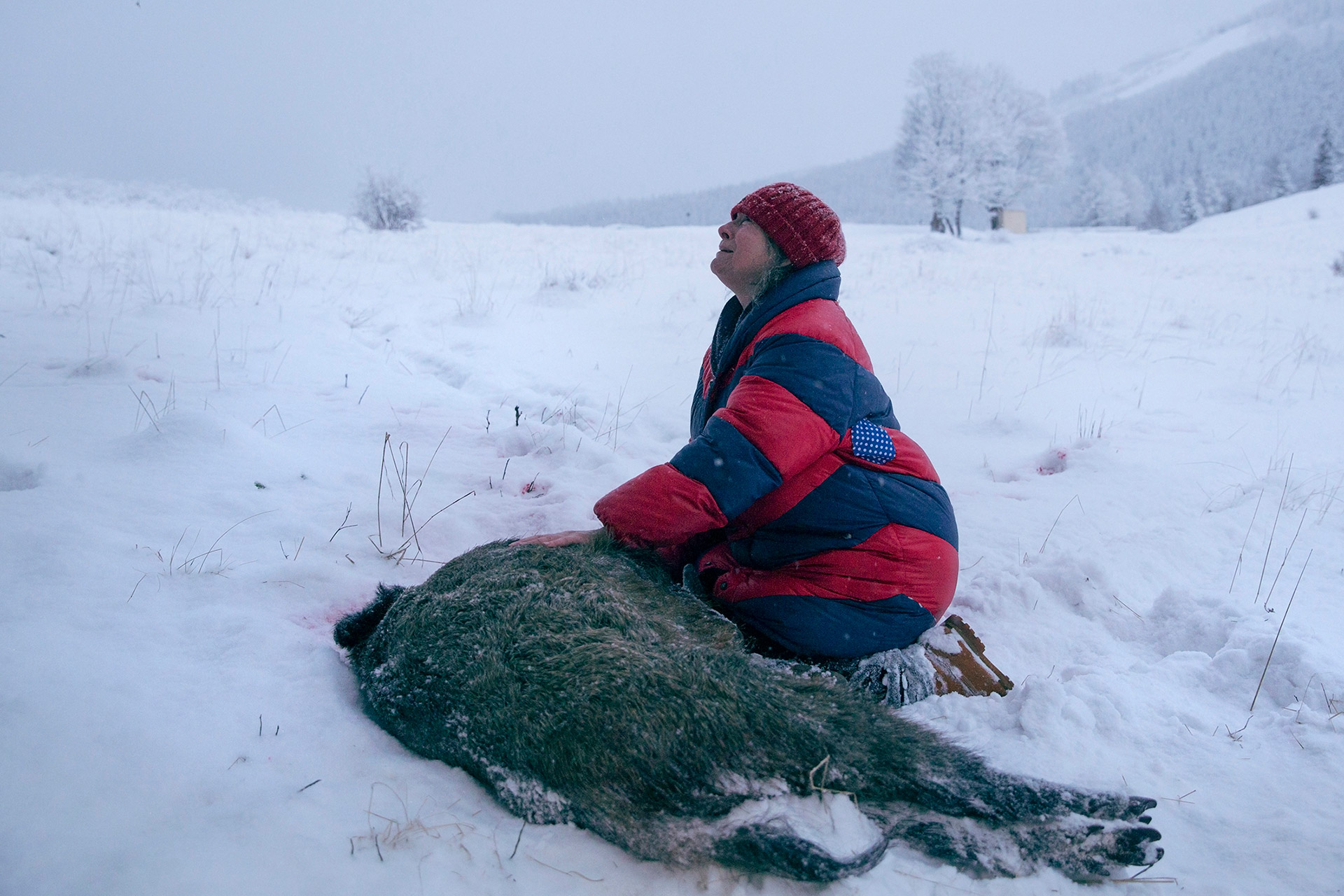 By a Sharp Knife

Ludovít lost his son in a brutal neo-Nazi attack. However, as a result of a failure of Slovak legislation, the attackers are soon set free and Ľudovít faces an absurd situation without any chance of justice. He takes on the disinterested police, the bribed judiciary and the fact that he has never been very close to his own son. The more he blames himself for his death, the more his relationship with his wife Zuzana and younger daughter Janka crumbles. And the more urgently he tries to influence the investigation

"The resemblance to real events or persons is not purely coincidental." Gottland is an unconventional look at the 20th century. The short story film presents peculiar fates, the love affair of actress Lída Baar with Joseph Goebbels, the story of the flying writer in the service of the STB Eduard Kirchberger, the Bata idea of belt production and the tragic decision of Zdeněk Adamec to burn himself to death in protest against the workings of the social system.

Each of the short stories is formally surprising, whether it is the use of rotoscoping in the animated short story The Flying Horse by Viera Čákanyová, the creation of a new "strip film" in the short story 86 400 by Lukáš Kokeš, or the original combination of fiction and reality in the short story The Virginity of Lída Baar by Petr Hátle. The film is based on the famous bestselling book Gottland by journalist Mariusz Szczygieł.

A documentary exploration of the modern phenomenon of nightlife and insomnia. Through authentic portraits of the characters inhabiting the dark "half-world" of Prague's non-stop bars, gambling halls and nightclubs, it maps the living space and community of the people of the "eternal night".

The film consists of portraits of several people for whom such establishments have become a natural living space, a lifeline where one is never completely alone. Insomnia, the inability to bear with oneself and the compulsion to meet up with similarly afflicted people in "bunkers", often also simply a love of nocturnal adventures, crime and drugs. The paradoxical situation of prolonging insomnia through the use of meth and other stimulants, deepening paranoia about the light and the world. Creating a subculture with its own morals and philosophy. 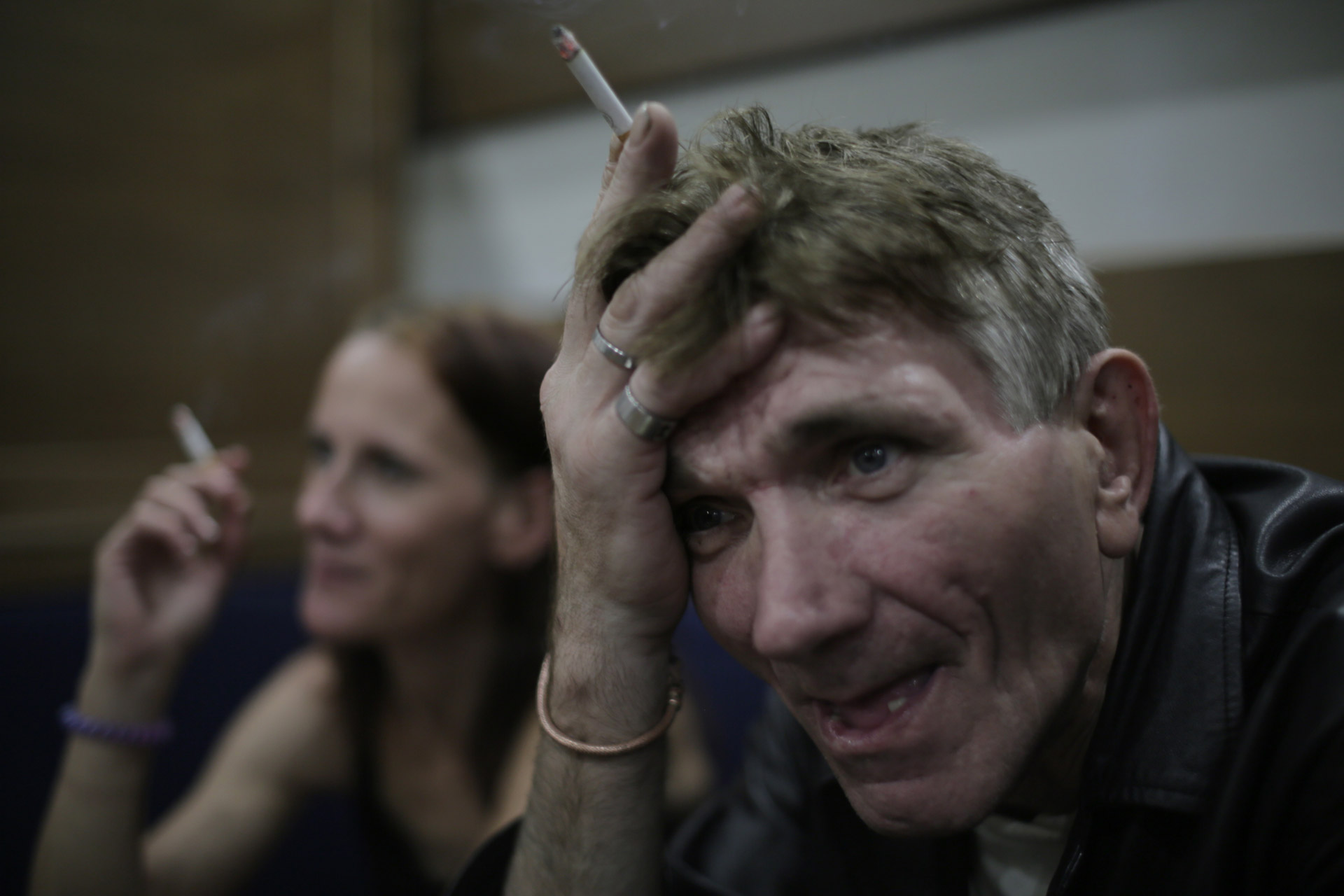 Transnistrian Republic of Moldova. Imagine a space where history has stopped. Time has slowed down almost to a standstill, life has been preserved as it was before the collapse of the Soviet Union. People have come to terms with the fear caused by the frequent manoeuvres of the secret police and the omnipresent police surveillance, but they have not stopped being afraid. The Soviet mindset, dulled by the primitive but apparently effective propaganda of President Igor Smirnov's authoritarian power apparatus, is making the majority of the population of the Moldovan Republic of Transnistria workers of indifference. For twenty years now, Smirnov has been at the head of an officially non-existent republic that he managed to create before the collapse of the USSR. On the border of today's European Union, Fortress follows several characters caught in the geopolitical gap between Europe and Russia, between the present and the past, between the mafia and decent people, between decadence and the hope for change. Against the backdrop of the Transnistrian presidential elections, the film analyses the rules of the organisation of the non-state and ordinary life in it. 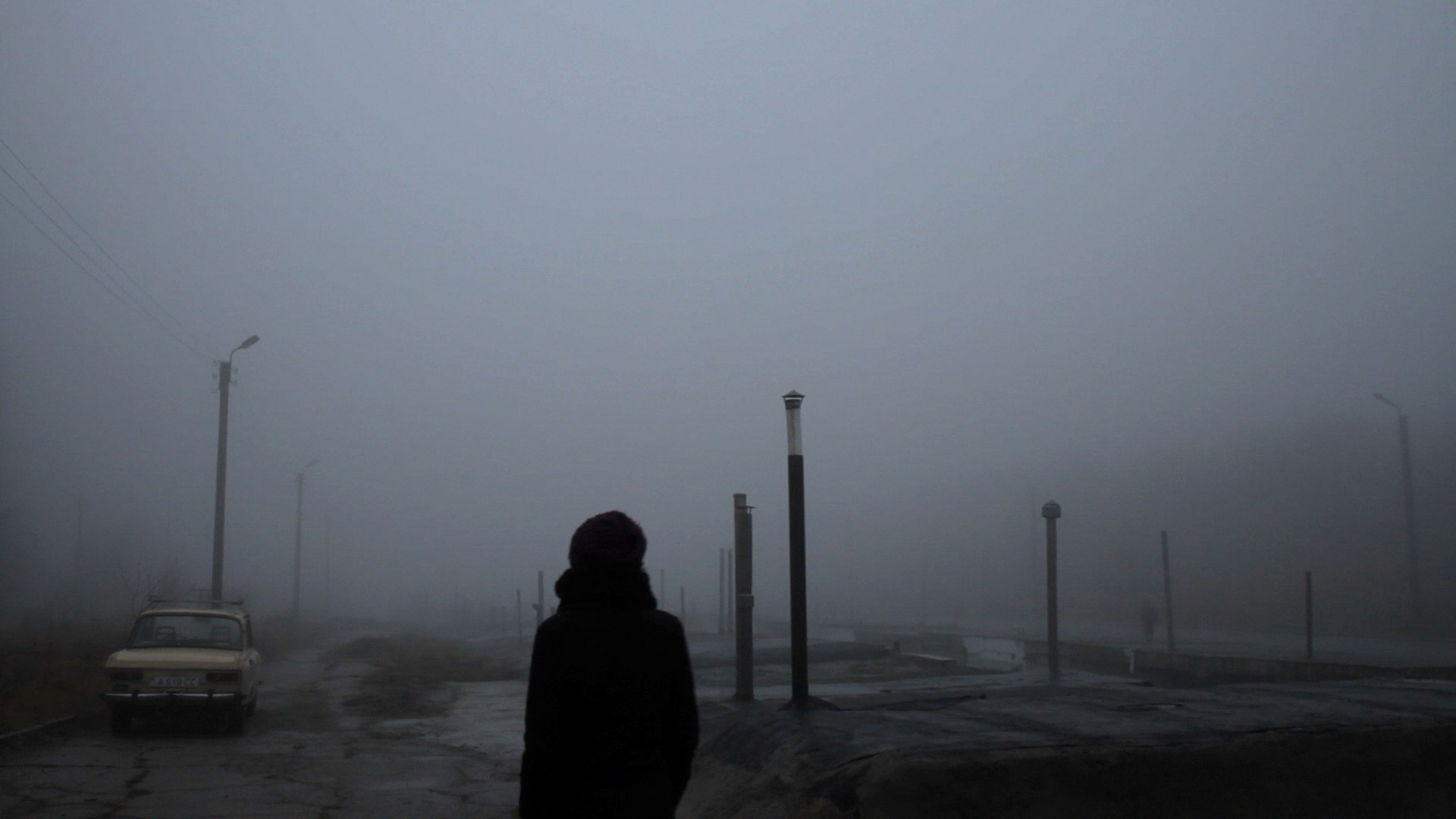 The fairy tale tells the story of two wood thorns, Josefka and Bertík, who are so small that they can live in a stump and move nimbly through the forest. Bertík takes care of the strange tinkling mushrooms in the moss forest - night lamps that he turns off and on every day. Josefka, his younger sister, sews hats for the adorable toadstools and generally keeps them happy, which is not an easy job. The toadstools are very talkative and quarrelsome, and because, like all mushrooms, they have only one leg, on which they can't get anywhere, they can't stand each other anymore. The wood thorns would have had a wonderful life if one day Rusalka hadn't appeared and Bertík's shining mushrooms hadn't started to disappear...

Last season a new team entered the lowest Czech football competition. FC Roma is a Děčín club in the district league, which is composed mostly of Roma players. "If I don't like someone, I will want to beat them," says coach Pavel Horváth. But his opponents see it differently and most of them are boycotting the Roma club. So it's a bit of a strange season for FC Roma. Sometimes it plays, sometimes it doesn't play, nothing is certain ahead of time and the club wins most of its matches by default. But the FC Roma players do not lose their sense of humour and fight both on and off the pitch. But sometimes it's harder than they imagined: they lose balls, players indulge in marijuana, fans shout at them to go to work. But the club is moving higher and higher up the table. Will the players be able to move up to the next level and convince the community that they are not aggressive 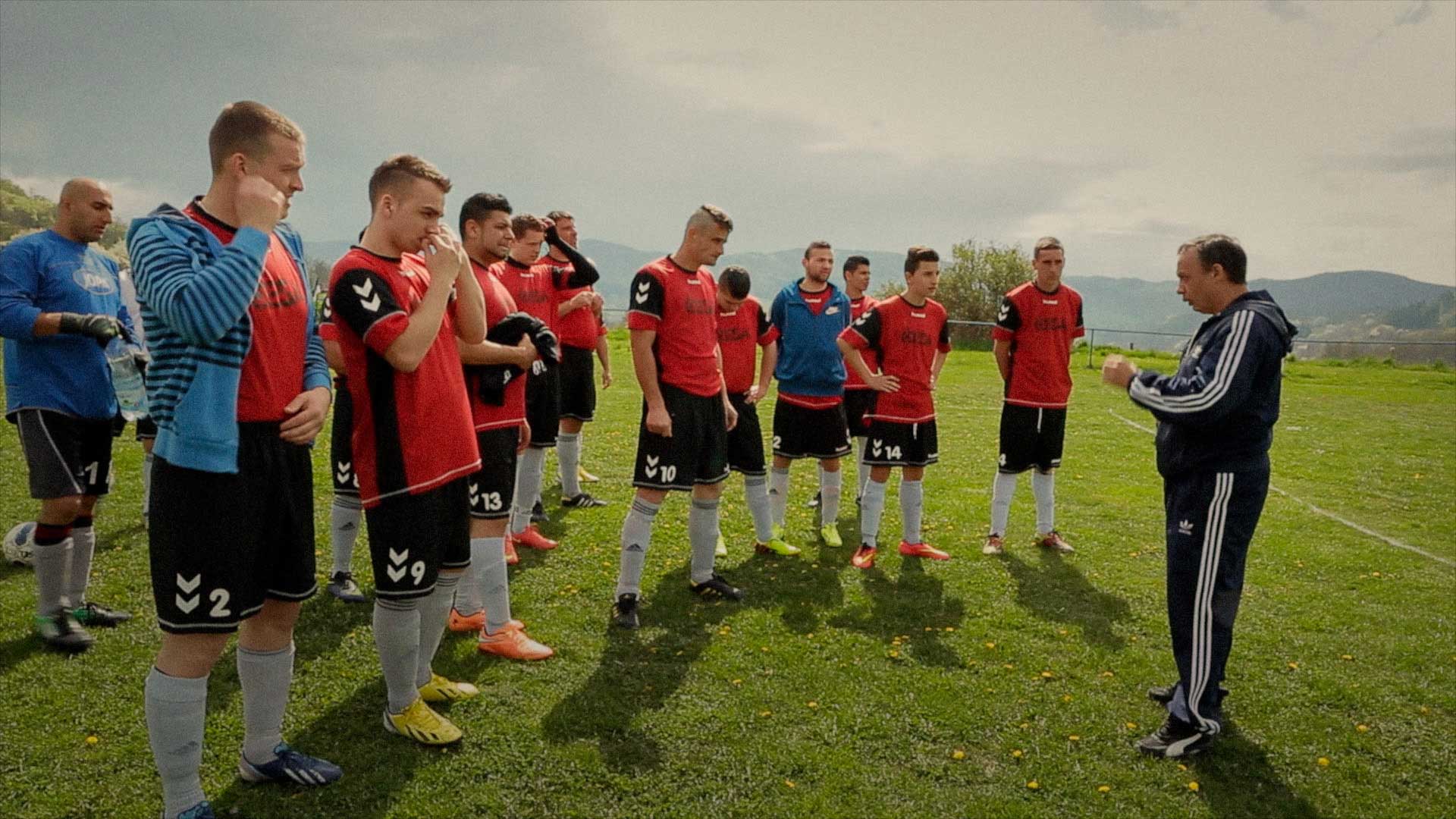 One woman, two men, four children and an animal farm in the middle of a housing estate...
Natasha lives on a housing estate in the centre of Kiev. She lives under one roof with her two husbands, four children and a herd of restless goats and pigs. Her dilapidated farm, where the goats scurry between the multi-storey apartment blocks, is a testing ground for individual freedom in contemporary Ukraine. Developers would like to demolish the farm, but the energetic and witty Natasha protects her home at all costs. The shabby farm, after all, is a much more humane place to live than the sterile prefab rabbit hutches around it. Neither Natasha's anti-nuclear conspiring husband nor her Jehovah's Witness daughter can disrupt the family's happiness. 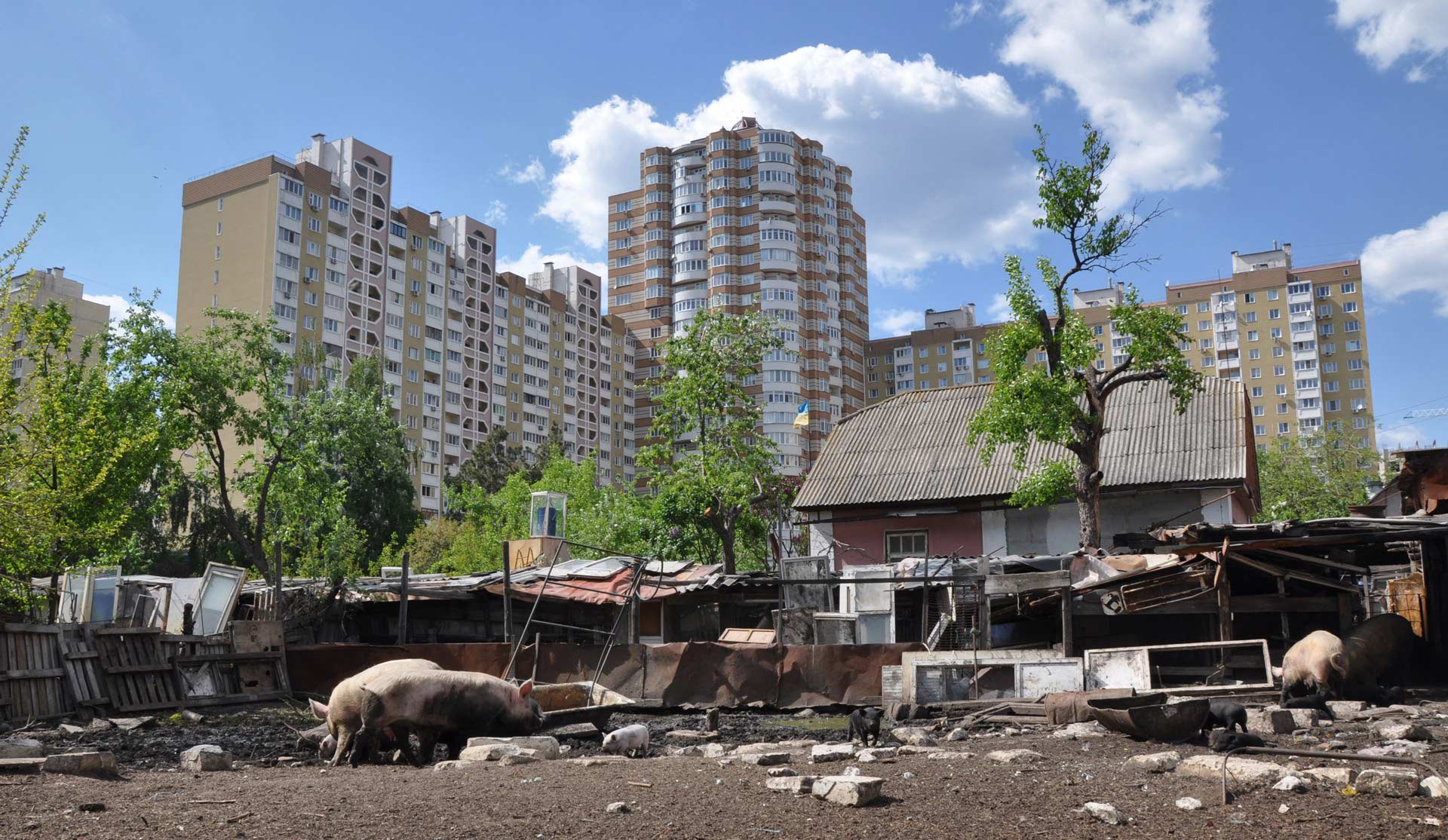 Entrepreneur Michal Mertl would like to be called the architect of success - he founded the children's singing group 5angels and with his project he is trying to conquer the highest levels of Czech show business. Michal guides his charges with the iron hand of a sports coach. The girls rehearse every day, they hardly have any free time. "They are just normal 12-year-old girls who work". All this to turn them into a great commercial product and dominate the market for children's popular music. So the girls have performed everything from yoghurt campaigns to a musical written for them by Michal David.
A documentary about life behind the curtain of a never-ending show in the backstage of the entertainment industry. 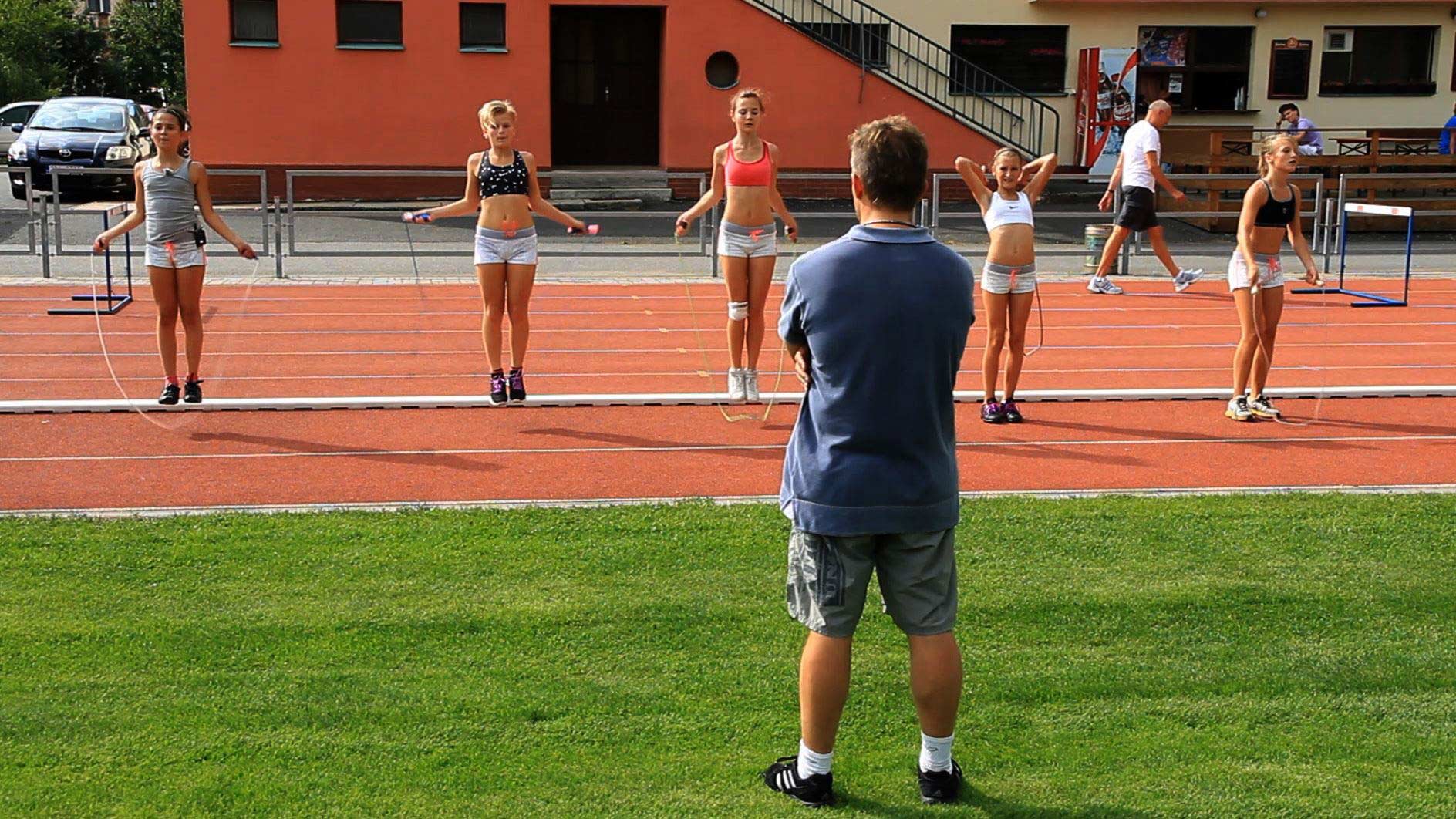 Nutprodukce is a Prague-based production company. Our main goal is to seek and find new approaches to film and television. We are interested in work that is innovative, distinctive and universal. Films and series produced by Nutprodukce have been awarded at the Berlinale, Cannes, won 15 Czech Lions and 6 Czech Film Critics Awards, among others. The Burning Bush was selected as the Czech Republic's nominee for the Oscar and Golden Globe Awards in 2013.